This week’s blog topic for the MFRW blog challenge really made me think. What does make me laugh out loud?

There are several things that do, but the three stories that immediately came to mind are centered around family.

First, would come from my dad. I actually come from a line of storytellers, though I’m the only one who’s put anything to paper. My grandmother fanned the flame of my love for history with her wonderful stories of growing up in the twenties on a small farm in the mountains of West Central Pennsylvania. My dad, her son, also inherited this story-telling gene, but his is more toward comedy. I love visiting him and he telling stories of some of the antics he pulled as a kid. I’ve laughed more times than I can count as he tells one of his stories, even if I’ve heard the same tale many times. One of my favorite stories happened when he was a teenager and had come home late from his job. His mom had been watching two of her sister’s boys who were pre-teen age. When he got home that night, she asked him walk his younger cousins home–to one of the neighboring farms. Dad and his older cousin, who he worked with and had planned to help Dad work on his car because it stopped running, started walking the boys home. When they got about half way there, the other cousin ran back to the house and stole a sheet off the wash-line. He dressed as a ghost and jumped out at the lane leading to the boys’ home. But their trick backfired because the two boys ran the whole way back to my grandparents’ home instead past the “ghost” to their own home. The boys were so afraid of the the “spook” that they crawled in bed with my grandma and granddad and refused to leave the house. Apparently, my granddad  was so mad at my dad and his friend that he made them both do the worse jobs on, not only his farm, but the boys’ parents’ farm, and the farm of the cousin who’d played the part of the “ghost.” I think what makes this story so funny is just in the way Dad tells it. But whatever the reason, it makes me laugh every time I hear it.

The second thing that makes me laugh out loud is my kids. Thinking of this topic has brought to mind many funny episodes with them. If you’d read the other week’s post, you know I have a son, who has just finished up his second year of college on Wednesday, and a daughter, who is going to her Junior Prom tonight. They still say funny things, but two of the funniest happened when they were little. When my son was about nine, we were all sitting at the table eating dinner and were talking about the day’s events. My son was telling us about his day at school when he reached for the salt to sprinkle some on his mashed potatoes. I’d usually only let my kids use a tiny bit, but for some reason none of us were paying attention to what he was doing, including my son. As he spoke, he sprinkled salt, and kept on sprinkling salt until all of us at the same time realized several minutes had pasted and Marc was salting away. When he finally stopped, his potatoes had little piles of white crystals on top like fresh snow on a frozen mountain. We all laughed so hard, I thought we’d break something.

The story involving my daughter happened in the car while driving home from church. She was between the age of three or four and had just discovered the virtue of counting. She loved to count her fingers while someone said the numbers with her. So from the front seat, I counted as she held up a finger and said the number with me. When I got to eleven, she stopped me and held up all ten outstretched fingers and said, “Wait, Mommy, I don’t have anymore fingers!” It was such a distraught statement that my husband and I just looked at each other and cracked up laughing. I looked back at her looking at her fingers while my son rolled his eyes at her as he tells her not to be such a dumb blonde and just start over with her first finger as number eleven. At this my husband and I laughed even harder, because Laura is blonde and her response was a such a classic blond joke punch line it still makes me chuckle even to today. And of course her older brother, has never let her live it down.

So, those are three stories that has made me bust a gut. What about you, what makes you laugh out loud?

Check out other authors in the Challenge here: 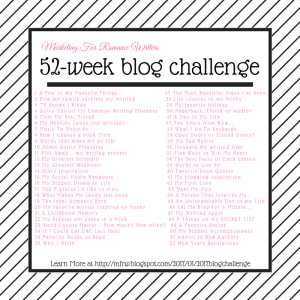