Here’s my first entry from my Heartstrings, book 1 of the Singing to the Heart series.  Now on sale for $0.99 across all vendors…. 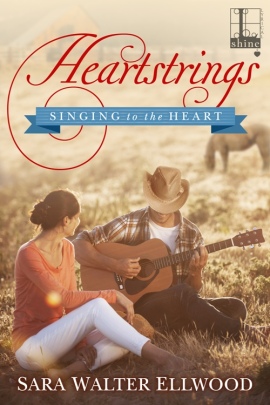 They both froze at the softly spoken word. When she looked past his shoulder toward the door, Emily stood there peering at them with her mouth hanging slightly open, eyes wide.

Abby immediately untangled herself from him and tried to shove him away. “Seth is helping me with the horses.”

Seth and Emily gawked at her with nearly identical expressions of bemusement, and she shoved at him harder. He let her down, but positioned himself behind her and held her close. She glanced questioningly at him. He raised an eyebrow, grinned, and leaned in to whisper in her ear, “I don’t think you want me to move right now.” She closed her eyes and trembled at the low rumble of his voice. “I’m hard as a rock.”

“Oh. Don’t move,” she whispered and made sure she was directly in front of him.

Swallowing hard, she turned to face her daughter, feeling very much like a teenager caught by a parent. Who would have thought the same embarrassment could be inspired with the reversed situation?

Available in EBOOK and PRINT

He’s determined to set things right, no matter the cost.

The last person Abby Crawford wants to face down is country music superstar Seth Kendall. Last time she did, she flat-out lied so he’d go to Nashville without her. She’s never understood why their mutual best friend proposed, but she went with it so her baby wouldn’t be fatherless. Now she’s a divorced mother of a teenager, and secretly Seth’s biggest fan.

Seth is home in McAllister, Texas for his father’s funeral…and a chance to meet the daughter he’s never known. He’s willing to face the music of his own making and admit he’s known about his little girl all along. For fifteen years he’s kept his distance because Abby told him to follow his dreams without her, insisting she didn’t love him. But now he won’t leave until he knows his daughter and she knows him, even if it means facing the woman who broke his heart for good.

Confessing she’s lied about her daughter’s paternity all these years won’t be easy for Abby, especially with her ex blackmailing her to keep the secret. And Seth doesn’t know the hardest truth of all: Every love song he plays on his guitar still plucks her heartstrings.