In Chapter 1 of Climbing Out of Hell, Trent likens the New York City pedestrians to marching ants. They stop for nothing.

When I commuted into Mid-town NYC, I likened the experience to being in a swarm of ants, all having different ultimate destinations, and none will be distracted by anything less than death.

The morning and evening pedestrian trek is a fast paced, aggressive, frequent-body-contact sport that requires all your attention. It is very important to get into the stream going in the direction you want.  If you are looking into people’s faces, you are in serious danger of being trampled.

Pedestrians move in opposing streams. Sometimes, the streams get strange and you’ll get two flowing east and one flowing west. Sometimes one direction will get pushed into the street and flow onto the parking lane. Also, the sight of construction grids on the sidewalk will cause a major mid-street swarm across the road.

Once you get into your proper stream, it’s like a racehorse event, where you are constantly jockeying for a better position. The last thing you want is to get caught behind old people or hand holding lovers without a care in the world.

To the foolish tourists in love who wander out in the early morning: Be warned if you try to hold hands during morning rush hour, someone will smash between you and possibly sprain your wrists. If you object to your ill treatment, the divider will shower you with a colorful display of cursing before disappearing into the moving herd before you. And before you can re-grip, a stream of people will permanently separate you.

Best advice: Stay in your hotel room until 9 a.m. During morning rush hour, there are NO RULES except “Stay out of my way!” when grumpy people are going to work.

If you chose to stop and wait because there is only 1 sec left in the countdown, you will be slammed from all sides as the twenty people behind want to cross but you are in their way.

Be warned: taxis and black limos tend to go from zero to a hundred in one second and have no problem hitting jay walkers. Over 200 pedestrians are killed each year in NYC and the % is increasing.

To be fair, if the taxis slowed and stopped for jaywalking people, they’d get stuck out in the middle of the intersection and within seconds, you’d have grid lock. 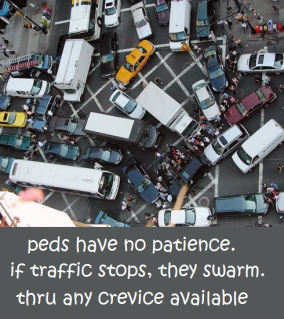 Pedestrians are not stopped by gridlock. They just swarm out wherever there is an opening and continue on their way.

Thus, the only way to prevent a gridlock is for cars to increase their speed when pedestrians run across the road in front of them. Fear of Death is the only thing left to control the ant peds as they swarm to work.

As you can see, going to work in NYC is an exciting, body contact sport with real life and death consequences. It’s a great way to start your morning.

Fortunately, Sam didn’t toss Trent out during morning traffic. Had he done so, Trent would have been trampled to death before the stream could divert around him. Lucky for Trent, the rude pedestrians who stepped on his fingers and tripped on him had time to mostly alter their path. Still, people relaxing on the sidewalk is unacceptable and the marching ants won’t stand for it.

Good thing the priest rescued him.

Climbing Out of Hell

Trent is in hell. How he got here, befuddles him. One moment he and Carrie are in love and life was nearly perfect. The next, he’s forced by Coco’s father to destroy his relationship with Carrie and marry Coco. Only he’d rather die than marry that she-devil. So he does just that, die.  But first he gives all his money away, to ensure it won’t go to Coco.

Upon faking his suicide, he gets a new face and identity, then follows his half-brother to Iowa where Sam has become the sheriff of a small town. Without the past standing between them, the two quickly become best of friends. Unfortunately, they still have the same tastes in women, and Trent falls in love with Sam’s girl.

Will Trent give in and take what he wants, or will he remain a man of integrity and lose his last chance for love?

Sam burst into the kitchen, frowned at Trent, then focused on Dani. “Leroy is at it again. I thought you said you were going to hide the damn thing?”

“Well, you hid it worth shit because it’s raining lead again at the downtown square!”

She gripped her head as if it might explode.

Sam rolled his eyes. “Iowa passed a law allowing blind people to carry and discharge weapons in public. So her grandfather, who is blind as a bat, sits on a bench in the square and shoots his AK into the trees.”

“What’s he trying to shoot?”

“Pigeons,” Sam and Dani answered at once. She glared him into silence and continued her reply. “He likes pigeon soup. A Pakistani doctor told him it would prevent strokes.”

“Well, he’s giving me a stroke,” Sam snapped. “You have to make him stop!”

“I’ve talked to him until I’m blue in the face. He won’t listen to me. Most of the time he thinks I’m three-years old. Who listens to a three-year-old?” She threw her hands up in frustration and turned back to the grill.

Trent didn’t care for the way Sam pushed Dani. Grandparents were impossible to boss around…at least his had been. “Why don’t you talk to him?’

Sam released a hurricane of air. “Because the mayor told me to stay away from him. He is not breaking any laws, and any attempt on my part could result in a lawsuit against the town.” He eyed Trent. “You should talk to him.”

“Sam, Trevor’s been in town an hour. You know Gramps doesn’t trust people right off.”

“Neither do you, yet here he sits, like an old friend, watching you cook him dinner.”

She rescued the burgers off the grill, slapped them both on buns, and shoved one at Sam. “This is your hamburger. Trevor is holding out for braised lamb.”

“Point still stands. Look, I think he can do the job. I intended to hit him with a ticket but he was so nice I sent him to you instead. He’s a likable guy. Let’s send him out and see if he can stop this madness.”

“Then I’m shutting this bar down for safety violations.”

She stared at him in shock. “What violations?”

Trent stood up. “Sam, you’re digging yourself into a hole. Your initial solution was excellent, and frankly I’m honored you think so well of me. I’ll go talk to him right now. Just tell me how to get to Pigeonville.”

Sam grinned and slapped him on the back as he led him out of the kitchen. “Way to man up. Seriously, I’ll owe you one if you can get the gun away from Leroy and bury it six feet under.”

Trent just hoped being a nice guy didn’t put him six feet under as well.

Climbing out of Hell

For the prior books of A Long Road to Love

“Be warned though, this book is completely different from The Worst Week Ever. Yes, there is still humor, dry wit, situations that you would think…NOT AGAIN but this one humanizes Trent more.” 5 stars – Brian’s Mom –Amazon

Once again, Ms. O’Connor has written a brilliant book about the complexities of relationships, good and bad. Again, to me, the book is the best break up book EVER and it left my heart singing in the end. Best.Book.Ever…


Other Books by Liza O’Connor

Lisa O’Connor
Liza  lives in Denville, NJ with her dog Jess. They hike in fabulous woods every day, rain or shine, sleet or snow. Having an adventurous nature, she learned to fly small Cessnas in NJ, hang-glide in New Zealand, kayak in Pennsylvania, ski in New York, scuba dive with great white sharks in Australia, dig up dinosaur bones in Montana, sky dive in Indiana, and raft a class four river in Tasmania. She’s an avid gardener, amateur photographer, and dabbler in watercolors and graphic arts. Yet through her entire life, her first love has and always will be writing novels. She loves to create interesting characters, set them loose, and scribe what happens.

Don’t forget to join the rafflecopter to win the $50 Amazon Gift Card.

Also a winner will be selected at each stop to receive a free ebook.